This is the third post in my statistics series and today we are going to talk about estimators. What they are, why would we use them and what are some desirable properties that we would like them to have.

Essentially what we learn from the definition is that an estimator is a recipe that takes in observed data and returns an estimate which we hope is a good approximation of a given quantity.

But before we start going into more detail, why would we need an estimator in the first place? We will examine the usefulness of estimators and understand their properties through an example.

How many people pass by in front of my house?

Let’s say that I spend my time observing the people that pass by in front of my house. Sometimes many people pass by and sometimes few, but this is not specific enough for me. Given that I am into statistics, I decide that I would like a better way to describe the number of passers-by.
It is good to start with some specifications about the process:

I have kept track of 10 hours of people passing by so let’s have a look at the data. 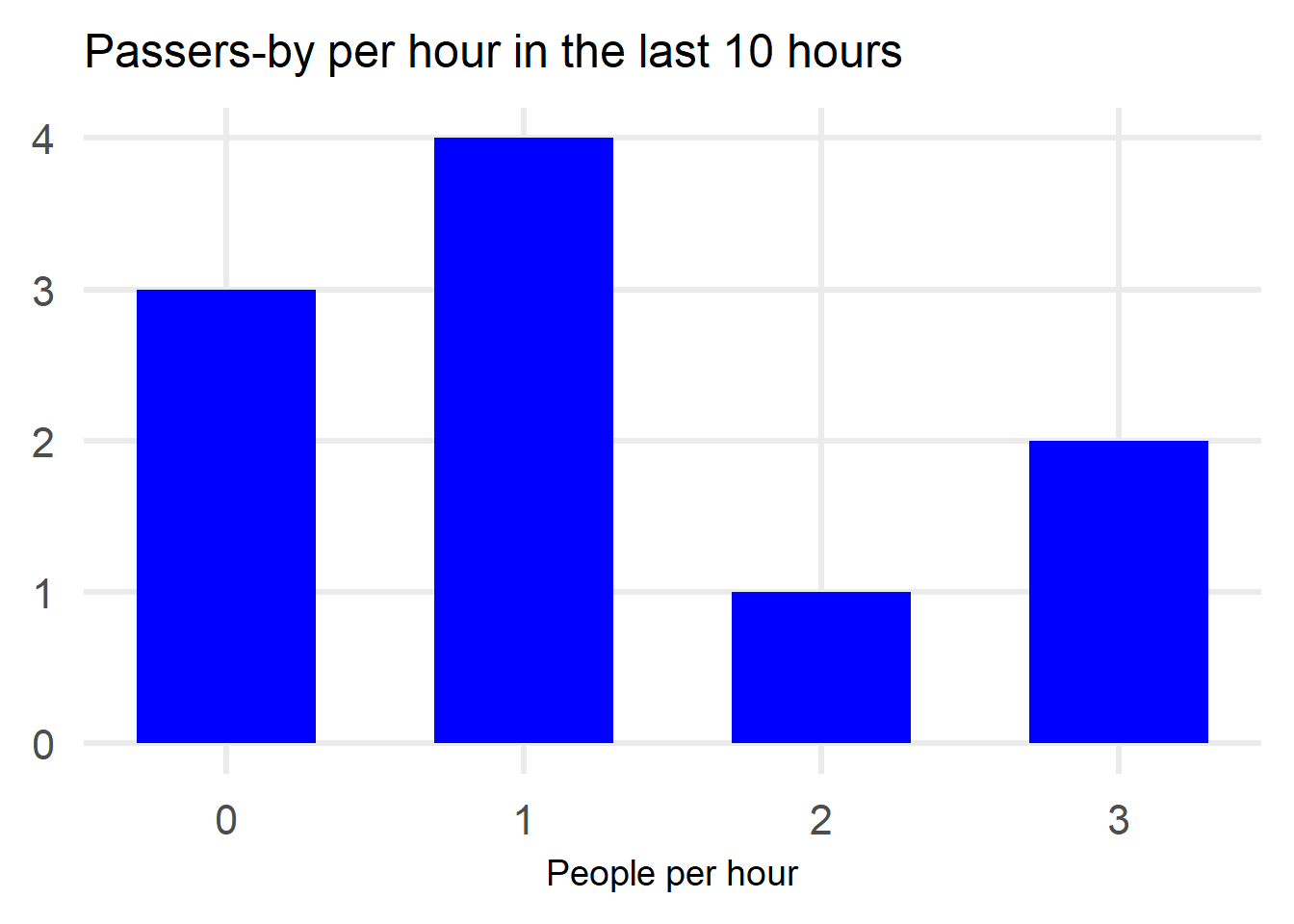 Based on the data we observe the following:

The last negative might be a bit confusing so let me give an example:
What happens if the actual chance that 5 people pass by my house is 1/1000? We would have to wait (on average) a lot of days to see this event occurring. Otherwise we would simply give it a probability of 0.

The other option we have is to assume that the number of passers-by is following a certain statistical distribution. Again, there are pros and cons to this approach:

Given that this is a post about estimators, we will have to pick a distribution for sure 😂

Which family of statistical distributions should we pick?

Based on problem construction we can eliminate some distributions:

That’s a good start, but really it does not help us thaaat much.
To get more help we could do:

The most common statistical distribution that is selected for modelling arrival rates (which is the type of problem we have here) is the Poisson. Just as a reminder the distribution looks like this:

A version of the Poisson distribution does look plausible given the problem and the small sample of data that we have.

So we can conclude the following regarding our modelling:

Which is the correct parameter? 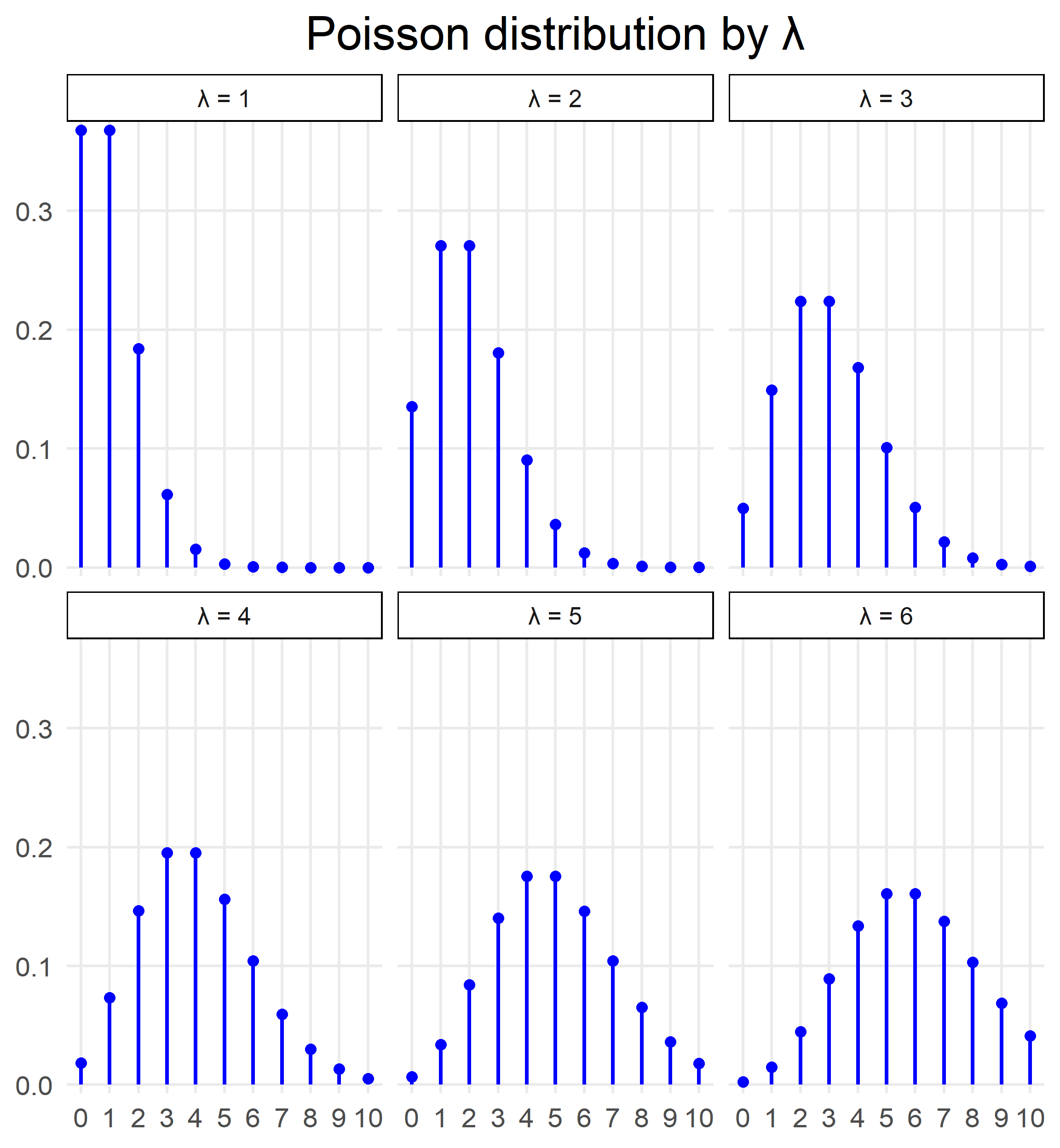 This is the part where estimators come in. We need an estimator to estimate the parameter λ of the Poisson distribution that we picked.

Bias of an estimator

Ideally, we would like our estimator to be unbiased, which means that we hope that on average (expected value) it is equal to the parameter we are trying to estimate (λ in this case, the estimand).

Variance of an estimator

The variance of an estimator is a very important property. Low variance estimators are to be preferred (as long as their distribution is reasonably close to the estimand!). Calculating the variance is very straightforward, we are simply using the same formulas as for any other random variable.

Consistency of an estimator

A consistent estimator is an estimator having the property that as the number of observations increases indefinitely, the resulting sequence of estimates converges in probability to the quantity we are trying to estimate.

Let’s see the consistency of our three estimators:

This relationship holds because of the Law of Large Numbers which states that for sufficiently large n the average of the results obtained from a large number of trials (sample mean) should be close to the expected value. In this case, the expected value of X is also the quantity we are trying to estimate and therefore the estimator is consistent.

Consistency check for estimator #2:
The probability distribution of the second estimator is unaffected by the number of points we collect. Therefore, it is not consistent.

Consistency check for estimator #3:
The distribution of the 3rd estimator remains constant and equal to 4. This estimator is not consistent.

Putting together the results

Looking at the table, we can see that the first estimator (the sample mean) is the one to be preferred as it has:

The 3 properties that I described are generally accepted as the most important ones but depending on the problem another 2 factors could play an important role:

We saw in this post what is the reasoning behind trying to find estimators. While it is very easy to pick an estimator (as we saw it can be almost any function that does not depend on the estimand), finding a good one requires some effort. In the next statistics posts we are going to see how to pick them.